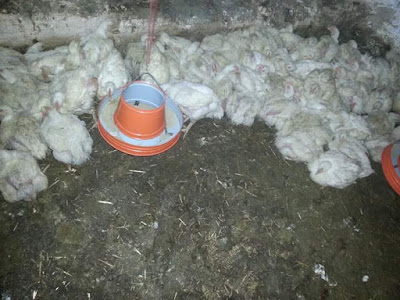 Poultry farming, being one of the lucrative businesses in agriculture, has turned average Nigerians to millionaires. A good poultry farmer has to be very cautious and observant, also he or she must do all required to ensure the well-being of his or her flock.

Here are the nine management practices a poultry farmer must take very serious
1. Despurring
The spur is an extra digit of the cock, which in light breeds or strains like the Nigerian indigenous fowl is well developed. This sometimes injures the farmers during handling and also the back of the breeding hen during mating. It often reduces fertility as breeding hens avoid mating.
The spur is removed at 10-16 weeks of the age of the fowl when the cap is well formed, that is, during the growing stage. A sharp knife or a pair of scissors is used.
2. Wing-banding
If you operate on a deep litter system, then you need to adopt wing-banding for the purpose of observing individual weight, breeding and performance and other useful records. Wing bands are attached to the wing web joining the muscles of the humerus with those of the ulna and radius.
3. Delousing
This is the control external parasites, these miniature creatures are so dreadful as they can ruin a profitable poultry business. They drastically reduce egg production in layers, also reduce feed efficiency.
For the control of lice and other external parasites, sodium fluoride powder may be applied in reasonable quantities to the head, neck, breast, underside of each wing, thigh, tail, under vent and on the back. This powder may also be sprinkled on the birds and rubbed in through the feathers. Rubber gloves and respirators should be worn when using sodium fluoride. The bird may also be dipped in a solution of malathion, holding the birds by its wings and dipping the body before the head. The treatment should be applied only in dry weather.
Also, a 40% nicotine sulphate and benzene hexachloride solution may be painted on perches just before the bird roost. Body heat vaporizes the nicotinic acid and the vapour kills the ectoparasites. This is repeated for about 10 days.
4. Dubbing
Dubbing is the trimming of the comb on a bird’s head. The comb is a useful part of the body for characterizing the fowl and for detecting poor layers. Blood flowing through the tissues beneath the epidermal surface of the comb helps in heat dissipation and therefore, large combs may be useful in the tropics.
However, the comb is the favorite target of the fungus favus particularly in the heavy Asiatic breeds. From the comb, infection may spread to other parts of the body. In breeds like the leghorn, the comb may be so overgrown that it blocks vision and If housed in cages, may prevent layers from access to the feed trough, thereby causing starvation of the birds.
When birds are dubbed, their combs are removed and they are thereby protected from the risk of favus infection. Moreover, they are reported to lay eggs free from blood spots.
Dubbing is performed on chicks with small pair of manicuring scissors, the comb is removed close to the head  and running the shears from front to back. There is little or no bleeding and stress is minimal.
5. Debeaking
This consists of the partial removal of the beak to prevent vice habits including pecking and feather-pulling, cannibalism and egg-eating, depending on the age when they occur. Debeaking should be the last measure taken to control or solve these problems, especially in adult birds, because these problems are symptoms of various management defects like inadequate feeding and drinking, insufficient floor space, faulty nutrition and stress.
Debeaking should be performed with great care to minimize stress and avoid damage to the back tongue.
6. Caponisation
The capon is a fowl which has been surgically or chemically treated so as to remove the action of the male hormones or increase the action of the female hormones. The testes of the males may be surgically removed while both male and female may be given hormone preparations, usually oestrogenic. Usually only males are caponised
7. Deworming
Deworming is the getting rid of intestinal worms that tend to cause harm to birds. Click here to read more worms and preventions.
8. Vaccination
Vaccination plays an important part in the health management of the poultry flock. There are numerous diseases that are prevented by vaccinating the birds against them. A vaccine helps to prevent a particular disease by triggering or boosting the bird’s immune system to produce antibodies that in turn fight the invading causal organisms.
Example is the marek vaccine given to birds on the first day of arrival through aerosol also Newcastle disease during the first week and many other vaccines.
It is imperative a farmer learns about vaccines and its routes before the administration.