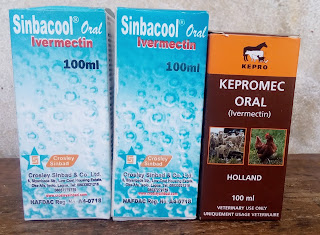 Deworming is the act of giving livestock animals anthelmintic drugs called dewormer, to get rid of parasitic worms such as roundworm, tapeworm etc. affecting the animals. Livestock animals need to be dewormed on a regular basis, say every four months or twice in a year. Deworming is one of the important managerial practices in a livestock farm.

This must be done to improve the health condition of the animals and also enhance their productivity. There are different types of intestinal worms affecting livestock animals; also, there are different types of dewormers used in getting rid of these parasitic intestinal worms. A good farmer needs to have adequate knowledge about these two key factors.

There are four major types of worms affecting livestock animals; they are:

These worms affect various portions of the animal’s system; they show different signs of infestation. Roundworms and flatworms rob farm animals of blood and nutrient; this leads to the poor health status and loss of vigor of such animal.  Worm infestation generally leads to:

Generally, worm infestation occurs from the nature of the feed farm animals eat; this is why it is imperative farmers deworm their stock periodically. Worms do not multiply in their host; worms lay their eggs in the grass, which transform into larvae. Animals eat the larvae with the grasses when grazing. The larvae enter the body of the animal and develop into adult worms. The adult worms produces egg, which are dropped back to the ground as the animal defecates.

There are different types of dewormers used to control internal parasites or worms. Some are broad spectrum, that is, control more than one worm while others are narrow spectrum, they are meant for just a particular type of worm. Below are the various examples of dewormers and the kind of worms they control.  The first eight (8) are broad-spectrum anthelmintic or dewormers while the last five (5) are narrow spectrum, majorly for controlling just one type of worm.

These are the types of dewormers and the types of worms they control effectively. You can also use any of them, especially the broad spectrum dewormers, as a preventive measure against worm infestation.

To boost the productivity of your farm; ensure you add deworming to your managerial activities. Intestinal parasites or worms are pests to livestock and can inflict on them great pain, leading to poor growth and production.