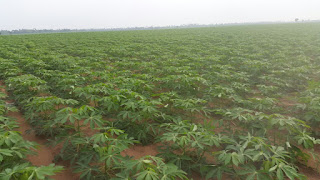 Cassava, botanically called  Manihot spp,  is a woody perennial and branched shrub that can grow up to  5 metres in height. It has large, spirally arranged, lobed leaves of very variable forms. During growth, the shrubs produce several tuberous roots as reserves made of up to 35% starch which may reach up to 1 m in length and together may weigh up to 40 kg. Cassava produces small, regular female and male flowers in small clusters. The shrub produces a form of non-fleshy fruit capsule.
Cassava is one of the easiest crops to cultivate as it does not require sophisticated environmental conditions. Cassava is very much adaptive to climate change as it can resist high temperature, drought. Cassava grows well on all types of soil with an exception of heavy or saturated soil. Though, it gives preference to light, well-drained and deep soil rich in organic nutrients.
Cassava also tolerates high temperature as it thrives well on tropics and sub-tropical regions. It tolerates long dry seasons (6 to 7 months) as well as reduced rainfall. Cassava grows better in all regions near the equator, at elevations below 1,500 m, rainfall between 1,000 to 1,500 mm per year and a temperature of between 20 oC and 25oC
Cassava may be planted alone or intercropped with other crops such as maize, plantain, vegetables or legumes. The cultivation of cassava does not require much labour from the preparation of the land to harvesting. Sweet cassava tubers may be harvested 8 to 10 months after planting, whereas for the bitter varieties, the harvest starts from the 12th month.
Cassava is very good at weed control because ones the plant is around 6-7 weeks, it already forms canopy with its leaves, therefore, considerably reducing weed emergency. Thus, reducing cost of weeding and herbicide application. Also, due to its hardy nature, cassava doesn’t not require irrigation facility as it can adapt and tolerate adverse weather conditions.

During cutting selection, the best varieties of cassava to plant are those that are rich in dry matter, which can be stored in the ground and are well adapted to the production area. These are the varieties with early tuberisation and which are easy to process. Cassava cuttings are usually collected in the field during harvesting.
Improved varieties may also be obtained from research or appropriate development organizations. Cuttings of 20 to 30 cm long from the central portions of the brown healthy stems at around 12 months old are considered and preferred to be planted. Avoid any significantly hardened or tender stems. Healthy crops can be identified by their strong stems and branches, lush foliage, stems and leaves showing little damage from diseases or pests.
To ensure reasonable yield and uniform growth, it is advisable that the stems should be harvested at about a week before setting and store them in the shade, in a well-ventilated area. The cuttings should be taken at the time of planting or on the day before. Each cutting should have 5–7 dormant buds.
Fertilization or manuring is not necessary on a  virgin or long-term fallow land. Under intensive or continuous cultivation, fertilization enhances the plant’s absorption of mineral elements. For the production of cuttings, mineral fertilizer is preferred. When preparing the soil, add dolomite lime at a ratio of 100 kg per hectare.
Two months after planting, add NPK fertiliser (10, 18, 18) at a rate of 300 kg per hectare, to produce at least 25 tonnes per hectare of urea (150 kg per hectare), tricalcium phosphate (100 kg per hectare) and KCl (250 kg per hectare), with a production target of at least 30 tonnes per hectare. Organic fertilizer, like farmyard manure, is recommended for the production of tubers. When preparing the soil for planting, add chicken litter or any other animal manure at a rate of 10 tonnes per hectare, or 15 or 20 tonnes per hectare if the soil is depleted.
Planting should be at a density of between 6,000 and 10,000 plants per hectare or with spacing of between 1.5 x 1 m to 1 x 1 m for single cultivation and 2 x 2 m with intercropping, or 2,500 plants per hectare. Cassava should be combined with other crops to improve agricultural profitability and soil quality.
Because the nutrients, they release into the soil, legume species such as cowpea, beans, and groundnut are particularly suitable. Cassava can also be combined with maize, plantain, and legumes such as: cowpea and soybean. The cuttings are planted horizontally, diagonally or vertically, with one or two cuttings per placement.
The best method is to push them in sideways up to ¾ of their length, with the knots pointing upwards. Positioning the knots upside down reduces the yield. Planting sideways favours the consolidation of the roots into one area and results in a grouping of tubers, which makes harvesting easier.
Pest and diseases are major factors to be considered, there is no how a farm would not encounter these threats. However, there are approaches to mitigate the effects of these factors, they are called prophylactic measures. One of which is the use of resistant varieties of stem. There are improved cassava stem like the TMS 419. In case of any out break it is cogent the farmer seek due process as to how to cure it. 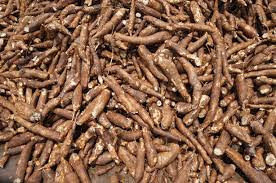 After about 12 months of planting, the cassava is ready for harvest in some varieties, though some are early like 10 months. The dry season is the best time to harvest cassava because the tubers are rich in starch at that time, drying is easy and the products can be easily processed and preserved.
The harvest involves cutting stems at a height of 25 to 34 cm from the ground using a machete and removing the tubers, making sure not to damage them. This can be done by hand if the soil is light or using a hoe, a stick. The yield varies from 20 to 30 tonnes per hectare for local varieties and from 25 to 70 tonnes per hectare for improved varieties.
In hostile environments where other crops fail, cassava can provide good yields. In typical conditions, the yield may vary between 8 to 15 tonnes of tubers per hectare.
Cassava can be transformed into different finished products like
1.Cassava stems production
2.Cassava garri
3.Cassava fufu
4.Cassava starch
5.Cassava chips
6.Cassava pellet
7.Cassava ethanol,e.t.c
Considering it simplicity and hardiness, also its high market demand, cassava is conclusively the most lucrative agribusiness for all and sundry.

4 thoughts on “WHAT MOST FARMERS DO NOT KNOW ABOUT CASSAVA FARMING.”