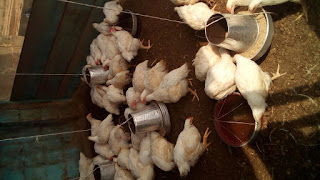 One of the major diseases in poultry is Coccidiosis. Poultry farmers are often unaware of the outbreak of this disease until it causes a major loss or breakdown in the farm. Managing chickens could be very challenging; they are highly susceptible to deleterious diseases that can affect their productivity.

Coccidiosis is a protozoan disease caused by Eimeria spp. There are about 7 species but only 5 are common. Of these 5, Eimeria tenella is more fervent and common in poultry. Others are E. necatrix, E. mitis, E. brumet and E. acervulina.   Coccidium (plural: Coccidia) is the pathogen that causes coccidiosis in poultry; it is hardy in nature and can stay in the soil for a very long period provided the environmental conditions are favorable for its survival.

Coccidiosis is a very dreadful poultry disease that can ruin a farm within days. Yes, I mean days and not weeks or months. The most ominous feature of this disease is that; it is not easily detectable until it has fully developed and causing acute mortality.
This makes the treatment of coccidiosis a less-effective approach to control the disease because a larger percentage of the birds would have been lost as a result of heavy infection.

Prior knowledge of the outbreak of Coccidiosis is obscure but it can be prevented and from evolving. Young birds are more susceptible to this disease; usually birds between the age of 4-6 weeks.

How chickens get infected

As earlier said, the pathogen that causes Coccidiosis, coccidia stays in the poultry bedding; the chickens pick and ingest them from the litter material. After ingestion, the coccidia multiply in the chicken’s system. The coccidia produce eggs called oocytes which are passed out from the chickens as waste; other chickens pick up the eggs and the cycle continues.

Thousand of eggs or oocytes can be passed out as droppings; chickens raised in a crowded or high-density rate are at greater risk of getting infected as the pathogens are virulent and are readily available in the environment. The ambient temperature and normal condition that favor the chickens also favor the survival of coccidia.

Coccidiosis in poultry is classified according to the infected parts of the individual species of the pathogens. They are classified as either intestinal or cecal, indicating the action of the pathogen on the intestine and the ceca. E. necatrix affects the intestine while E. tenella affects the ceca. The two parts, intestine, and ceca, are the prominent internal organ of the chicken.

Coccidiosis is heavily associated with young birds between the ages of 4 and 6 weeks; it greatly impairs the ceca and small intestine of the chicken, making it a very dreadful disease. The prevalence of this disease is at its peak during the warm season or warmer months. Hence, a poultry farmer must be very careful during this period.

Symptoms of Coccidiosis in Chickens

The symptoms of coccidiosis in poultry varies with the species of the Coccidia. This is because the pathogen affects different parts of the chicken. The early symptoms are not usually determined or let me say they are difficult to determine as the egg or oocyte has a very short incubation period of 2-3 days.

In E. tenella, chickens show symptoms at about three days after infection; chickens become droopy and emaciated, they huddle together and eat less. At day 4, blood stains appear in the dropping; this is an advanced and dangerous stage of the infection. It becomes more severe on day 6 when there is heavy blood in chicken poop. This is when most farmers become aware or observe the disease, thus, all efforts to recuperate the chickens become more or less abortive as the death of chicken follows this stage.

In E. necatrix, it is quite different. This specie is chronic and tends to incubate for a long time before showing any symptoms. However, this specie is more disastrous as its major sign is acute mortality; this specie usually render farmers restless as farmers are caught agape. The high mortality rate is usually associated with this species. Coccidiosis caused by E. necatrix is more dangerous and deadly.

E. acervulina is less pathogenic and least severe of all Eimeria spp. It is usually associated with loss of weight, watery and whitish diarrhea. Generally, coccidiosis in poultry symptoms are:

Treatment for Coccidiosis in Chickens

For quick action during acute mortality, Baycox should be administered. It is very expensive but very effective. Amprolium 20 and Cossine are also good for controlling Coccidiosis; for effective action, Amprolium 20 and Cossine should be administered together for 4-5 days and litter should be changed. Follow the instruction embedded in the package of the drugs to avoid overdose or under-dose.

Prevention of Coccidiosis in Chickens

Prevention as popularly said is better than cure; it is cheap but strict. Coccidiosis can be prevented by strictly adhering to the following practices:

Coccidiosis can also be treated organically using herbs. Herbs that cure coccidiosis are:

All these herbs are natural treatment for coccidiosis; they can be crushed and added to the feed or added to drinking water; they are preventive measures that prevent diseases and help boost the immune system of the chickens.

Vaccination is another effective way of preventing coccidiosis; it helps to increase the immunity of the chicken. Vaccines for coccidiosis in chickens are:

These vaccines should be administered to the chicks between day 1-5 orally, through drinking water.

Coccidiosis is best treated using preventive measures; it can be prevented by keeping the litter dry always and keeping excess moisture away from the farm. If possible, sterilization of the pen and litter should be done before stocking and brooding. It kills the Coccidia present in the poultry house.

15 thoughts on “Coccidiosis In Poultry: Causes, Symptoms, And Treatment”