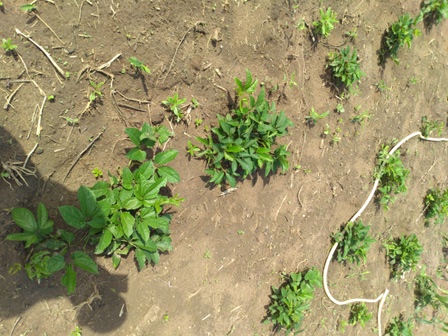 Ugu vegetable, botanically known as Telfaria occidentalis is an indigenous vegetable crop in Africa; it is also called fluted pumpkin. Ugu plant is cultivated for its leaves; it is a major part of African delicacies. The commercial cultivation of Ugu is so lucrative as Ugu vegetable is a short term cash flow crop that requires little or no capital to cultivate.

Prior to the establishment of ugu farm, I do encourage intending farmers to seek adequate knowledge to avoid any unfortunate experiences. Aside from authoring the ebook on ugu farming, I found it crucial to share these practical guides and insights to enable successful cultivation. In this article, you would learn the production practices for fluted pumpkin, cost analysis of ugu farming, how to make ugu farm bed, fertilizer requirements and best fertilizer for Ugu, marketing strategies, and storage of Ugu in raw and dried form.

How To Establish Ugu Farm

Crops have different preferences for the type and nature of soil they grow on; the type of soil to grow ugu for good performance is a well-drained loamy soil that is rich in organic matter with a neutral pH. A waterlogged soil does not support the growth of ugu.

Prior to planting ugu vegetable, the land has to be prepared using various land preparation methods. For commercial cultivation, I would recommend a conventional land preparation method where the land is ploughed twice and later harrowed to aid better rooting medium and allows the free flow of growth parameters such as air, water, nutrients and dissolved gases. Organic manure can be added into the soil during the second ploughing to facilitate the mineralization of the manure prior to sowing of the ugu seeds. Land preparation for ugu farming makes the making of beds very easy to achieve.

#3. Making of beds for Ugu planting

One of the purposes of land preparation in ugu farming is to ease the operation of the planting medium, the ugu vegetable beds. Crops are planted in different planting medium, some are planted on flat, ridges and beds. As for ugu, it is best planted on beds. In this guide, you would learn how to make ugu farm bed to facilitate good growth.

Ugu are best planted on raised beds of either 5 by 5 meters or 1wide by 10 meters long. The soil is raised to prevent the washing away by erosion and also provide a better feeding area of the emerging seeds. The bed must be spaced enough to allow the carrying out of various agronomic practices on the ugu farm such as weeding, watering, fertilizer application and harvesting. The inter-spacing between the ugu beds must be as wide as 0.5 meters.

It is not proper to plant fresh ugu seeds immediately after extraction from the pods. The ugu seeds have to go through series of treatment to make them assume germination as soon as they are planted. Firstly, after extracting the seeds from the pods, the seeds are air-dried. Do not sundry ugu seeds. Airdry the seed to reduce its moisture content before planting.

After air-dyring for about 24 hours, scarification must be done for the seeds to germinate rapidly. Usually ugu seeds germinate in about 10-15days but scarified ugu seeds germinate in less than 10 days. Scarification of the ugu seeds means bruising of the seed coat; this can be done with sands. Simply place a handful of seeds in your hand with sand in between and rub gently to bruise the seed coats.  After extracting the seeds, the seed can be treated with insecticide-fungicide mixture such as Apron plus or Seedrex to prevent the seeds from insects and fungi attack.

Planting ugu seeds is a technical operation as one must be careful to ensure the right side is inserted into the soil. When the seeds are successfully dried up, a pointed edge is noticed at the top of the seeds. This pointed edge is the portion that must be inserted into the soil at a depth of 3-5cm. Any mistake in the mode of planting could adversely affect the emergence of the seedlings. The pointed edge should be identified and ensure it points downward during planting. The seeds can be planted using different planting methods, namely:

Well-treated Ugu seeds would germinate at about 10 days to 12 days after planting.

After the planting and emergence of the seedlings, there are certain post-planting operations that must be done to salvage the seedlings to harvesting period, they include;

The seedlings have to be watered daily for the first two weeks of emergence to enable them to grow well.

Weeds have to be managed to guide against the competition on water, nutrients etc. with the seedlings. Weeding should be done every two weeks.

A nitrogenous fertilizer such as urea is the best fertilizer for ugu; because ugu is a leafy plant and such fertilizer enhances the growth of the vegetative parts or leaves of the plant. However, NPK 15:15:15 could be applied.

Staking is not encouraged in commercial ugu farm as it distorts the growth habit and could reduce the potential yield on the farm.

#5. Control of pest in ugu farm

Pests such as leaf defoliators and some pathogenic infections are often noticed. This can be controlled biologically by boiling neem leaves (Dongoyaro) and spraying the extracts in the leaves for a period of two weeks.

Ugu can be harvested after about 30 days of planting. The more the harvest the better the yield of the leaves in terms of size. Ugu can be harvested repeatedly for about eight months at an interval of 15 days. You need to know how to harvest ugu so that you do not trample on the fruits (pods) as they emerge. The safest way of harvesting Ugu is to pick up a long vine and inspect for the fruits (pods); the spot of the emerging seed should be the spot to stop the harvest.

Ugu vegetable is a perishable vegetable that can be stored fresh for a little period. After harvesting, Ugu can be stored in a cool room preferably a shelf or rack. Water must be sprinkled on the vegetable intermittently on the shelf. Placing ugu on bare floor can lead to rotting and rapid spoilage of the vegetable. Alternatively, ugu can be dried at room temperature to for longer storage. All you need to do is to clean the vegetable and air-dry till it becomes crispy. This does not reduce its nutritional value in any way.

Ugu farming is a very lucrative agribusiness that is capable of giving immediate returns on investment within a short period. I would recommend you purchase this Ugu farming PDF for better guide towards your cultivation. It goes for just #2000. Place your order