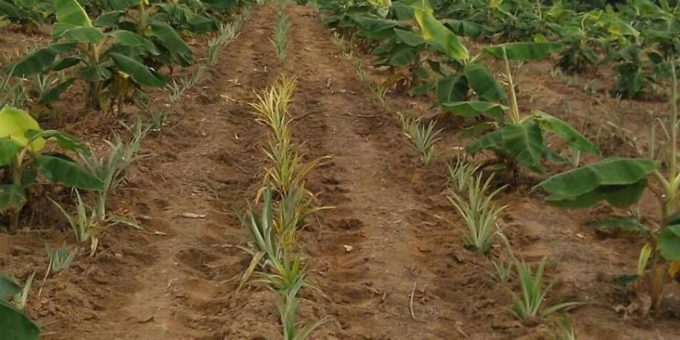 Why is it important to plant more than one crop on a piece of land?

What is the best way to intercrop one or more crops without affecting the yield and return? These you would find answers to as you read through.

Most farmers plant more than one crop on a piece of land solely to increase their farm profit. There is more to this practice. Intercropping contributes more to crop production; profit maximization is just one of the benefits of intercropping.

Truly, the land is an unlimited entity; however, you would agree with me that the competition farmers face on land use is making land limited for farming. Other industries are taking up arable land in large lots; the competition is much that they are on the verge of relegating agriculture.

Intercropping is a good practice in agriculture when done the right way; it helps to fully maximize the land area and increase yield per area of land. To make these benefits of intercropping come true, there are guides and techniques to intercrop plants without compromising the yield and the expected profit.

Intercropping is the planting of two or more crops concurrently on the same piece of land. This practice requires expertise as none of the crops must interfere with the performance of the other. Intercropping transcends the mere planting of crops to produce large lots of farm produce.

How Intercropping Works On A Farm

The idea of planting more than a crop on the same piece of land is to increase the land value and farm yield. Part of the ways of increasing the land value is to practice a system of farming that reduces the cost of maintaining the land and the crops on it. This is what intercropping does.

For instance, when you intercrop maize and cassava or plantain, you are sure the maize would be ready for harvest long before the cassava begins to develop roots or the plantain begins to flower. There are maize seeds that are early maturing like the Shuwan 1; it takes 75 days to maturity. The same idea applies to other crop combinations like cowpea and cassava or cowpea and plantain.

In addition, most of the early maturing crops are like maize are light feeders; that is, they require relatively lower nutrients compared to the late maturing crops like cassava, yam, plantain, etc., that are heavy feeders. This means there is no competition for nutrients as the crops have different feeding levels; they do not compete for water, space, and air.

Concept and principles of intercropping

1. Period of maturity of the crops

Before you decide to intercrop your desired crops, you need to consider the period of maturity of these crops. Intercropping works best by combining late maturing and early maturing crops. This is to ensure none of the crops interferes negatively with the yield and performance of the other.

When you plant two crops of the same period of maturity, like maize and watermelon or yam and cassava, the yield of both crops would be greatly impaired because there would be a great competition for nutrients, water, space and air between the crops.

On the other hand, if two crops of different maturity periods are planted, there is even use of nutrient, space, water, and air by these crops and they would both yield maximally. Hence, it is recommended you select plants that would be ready for harvest early and the other late. Example of good crop combinations for intercropping are:

Apart from increasing your farm yield and profit, intercropping can also help you maintain your farm profitably by controlling weed and increasing soil fertility. This can be achieved if you intercrop legumes with other crops.

An example is planting cowpea with cassava or plantain. The cowpea serves as a cover crop to control weeds and serve as a fertilizer because cowpea and other legumes are known for their ability to fix atmospheric nitrogen into the soil for crop use. Using the principle, you can as well plant cowpea and maize. The cowpea control weeds for the maize and as well as supply nitrogen into the soil for good growth of the maize.

3. Growth habit of the crops

The growth habit of the crops you want to intercrop is a major prerequisite to the success of this system of planting. Crops have different growth habit, they are:

Crops require air among other requirements. The growth habit of crops determines the amount of air such crop receive from the environment.

Plantain should not be intercropped with any crop with a similar level of growth; this is because both crops would compete greatly for air and space. Example is plantain and cassava, cowpea and watermelon or melon. These sets crops have a similar growth habits and relatively grow to similar height.

In addition, you can intercrop cowpea and maize despite the fact that these crops are late maturing but they have different growth habits. Also, cowpea is a legume and a cover crop; it will control weed and supply enough nutrient to eliminate competition with maize. I hope it is clear here.

The type of farming practiced determines the possibility of intercropping in any farm. In a fully mechanized farm like maizube farms, where the post-planting operations are mechanized, intercropping may not be carried out especially when the crops have different growth habits, an example is plantain and melon or maize and cowpea. This combination makes mechanized weeded unachievable.

5. Fertility status of the soil

Intercropping is best done on a soil with a high level of fertility. The fertility of the land plays a crucial role in the performance and yield of the crops; hence, if you are planning to intercrop two or more crops, you must have prepared your land to a reasonable level of fertility.

Now am sure you know the best crops to intercrop and why you are doing so. You can then proceed on intercropping crops that works to increase your farm revenue and use your land maximally.

Join our Facebook group for instant updates from us.