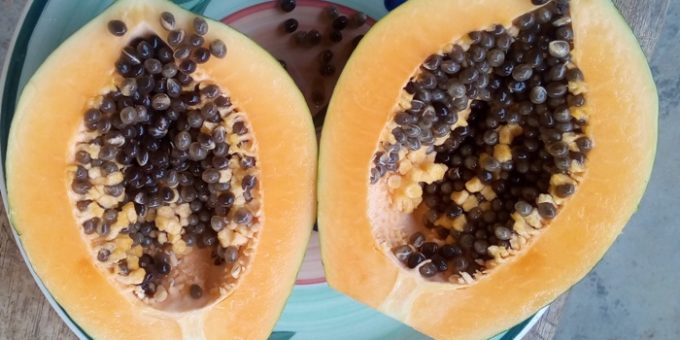 De-worming of chicken is one of the important managerial practices in poultry farming to aid the birds to perform to their genetic potentials. The main purpose of de-worming chickens is to rescue the birds from the infestations of parasitic worms such as tapeworm, etc.

When worms infest the chickens, these worms, leaving the chickens with little or no benefits to aid their performance, chiefly utilize most of the benefits the chickens are supposed to derive from the feed and other supplements, in terms of nutrients and energy.

Organic chicken de-wormer is not very common in use; most poultry farmers use the inorganic ones like Ivermectin. Some of the signs you observe in chickens that are heavily infested by worms are:

Hence, the application of dewormers in an integral practice for achieving good performance in any poultry enterprise, either egg production or meat production.

The use of organic dewormers for chickens has copious benefits.

Firstly, it helps to reduce the cost of production. One of the objectives of production is to minimize cost for better profit, this can only be achieved when cheap but effective alternatives are provided during the production process.

Lastly, this organic de-wormer is safe for use and has no detrimental effects on the chickens and consumers upon consumption. The commercial dewormers are known to have withdrawal periods; the period in which the chicken and its byproducts like eggs are unsafe to consumption, it usually lasts for about 14-21 days. This does not apply to organic dewormers; the chicken and its byproducts can be consumed irrespective of the time of application of the organic dewormer.

There are several natural materials that can be used as organic dewormers for chickens, but in this article, we would focus more on the use of pawpaw seeds and latex as an organic dewormer.

Pawpaw is a tropical crop that is known majorly for its sweetening property. Research has shown that pawpaw is of immense benefit in poultry production, both nutritionally and medically.

All the parts of a pawpaw plant, from the leaves to the roots, are useful and serve one or more functions in poultry management. Part of its medical functions is the source of raw materials for the production of organic chicken dewormer from the seeds and latex.

Organic chicken dewormer can be made from two parts of pawpaw; the seeds and the latex.

The seeds are tailored inside the pawpaw fruit and they can be gotten by cutting the fruit into two halves; then, they can be scooped out of the pulp.

The latex is the milky liquid substance that comes out when unripe pawpaw is pinched or when a small cut is made on the stem of the pawpaw tree. These two materials are very effective at controlling worms in poultry chickens.

Pawpaw seeds have anthelmintic properties; they are very effective at controlling poultry worms. They can be made into powdery or liquid form.

To make to powdery form, you need ripe pawpaw. Cut into two and scoop the seeds from the pulp. Wash the seeds to remove the yellowish lining and other dirt.

You now sun-dry the seeds and ground thoroughly into powdery form. This makes a Pawpaw Seed Powder (PSP). Alternatively, you can as well turn to liquid form. You will pour the powdery seeds into the water twice the volume of the seeds. That is, if the seed is 5ml, you will use 10ml of water to make the liquid.

Mix the mixture (the powdery seeds and water) thoroughly to ensure they blend well; then, you sieve the mixture and collect the liquid. The liquid is the organic dewormer you need.

The latex is the milky liquid substance that trickles out when incisions are made on unripe pawpaw while it is still intact on the tree.

The latex is an effective chicken dewormer; it is good for controlling all kinds of worms. To prepare this, make an incision, one or more, on unripe pawpaw while it is still attached to the tree.

Collect the latex as it flows steadily; you will observe it starts to coagulate. Sun-dry the latex or put in the oven at 40 degrees for 14 hours for it to become caked or solidified. Once this is achieved, crush the solid into slightly grey powder and store it in a cool dry place.

Dosage Of The Organic Chicken Dewormer

One of the benefits of using organic materials is that they do not have a precise dosage in real sense. But to be economical, some measures have been noted and still found effective.

For the liquid dewormer earlier discussed; mix 1 ml of the liquid in 10ml of water for three (3) consecutive days. This can be repeated every 2 weeks as a preventive measure.

They are all organic materials; they are cheaply available. They have broad spectrum functions aside from being anthelmintic in nature; they are effective antibiotics, antioxidant, and antibacterial. They are non-toxic to consumers and the chickens. If you want to establish an organic poultry farm, pawpaw is an essential raw material for your production.

Poultry farming is truly a lucrative agribusiness in the real sense; the ability of the farmer to boycott some flimsy costs or additional costs actually manifests the profitability of any poultry enterprise.

You may also find these helpful:

Join our Facebook group for an instant update from us.