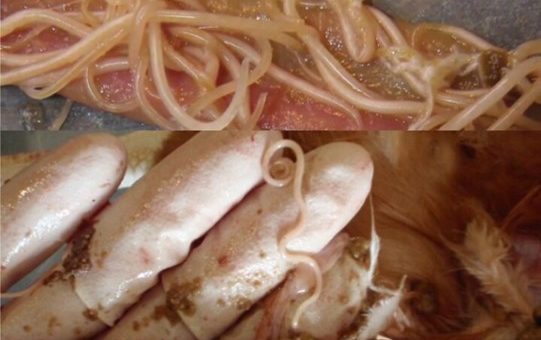 Worms are otherwise known as internal parasites; from the meaning of the word “parasites”, you should know that worms are threats to livestock well-being. There are different types of worms affecting chickens; roundworms, tapeworms, etc.

Most species of worms do not multiply in their host; adult worms produce eggs and these eggs are passed out as droppings. The eggs develop to larvae and the larvae are picked up with the feed particles as the chicken eats. Therefore, chickens raised under the deep litter system are highly vulnerable to worm infestation.

Several factors hinder the productivity of poultry birds; worms are among these factors and can be very detrimental to both the chickens and the farmer.

Worm infestation has deleterious effects in poultry birds: layers, broilers, turkey, and others. Parasitic worms in poultry are conventionally controlled using anthelmintics or dewormers; these are used in most commercial poultry farms. These drugs come with the withdrawal periods, period whereby the products of the poultry birds are unfit for human consumption.

This is not safe for the consumers and the productivity of your flock, is it?

The use of herbs to control worms in poultry birds is safer and more economical for several reasons. Firstly, herbs are cheaper compared to dewormers; herbs are non-toxic and have no detrimental effects on consumers upon consumption and most interestingly, when you use herbs for worm control, there is no withdraw period, meaning, the poultry products are safe for consumption anytime

So what are the herbs that can be used for controlling worms in chickens?

I have found five herbs you can use as organic dewormer ahead of the conventional ones. These herbs can be used as preventive measures for worm control or treatment in cases of severe worm infestation.

Albrizia anthelmintica is a thorny leguminous tree that can grow up to about 8 meters in height; it is a native of semi-arid areas of Africa. It is commonly found in African countries like Namibia, South Africa, Kenya, and Somalia.

The bark and shoot of this tree are widely used to control intestinal parasites, especially tapeworm. It is administered by crushing the bark and shoots; after which they are soaked in cold water to enhance palatability. The liquid is then strained and served orally through the mouth to livestock animals like poultry, cattle, sheep and goat. It is non-toxic and safe to use.

Pramnia maxima is another effective plant that can be used to control intestinal worms; it is a native of East Africa and widely grown in Kenya.

This plant bears very small fruits; these fruits are crushed and mixed with water, you can as well add a little salt to it; the mixture is served orally through the mouth in the evening to control parasitic intestinal worms in poultry, cattle, sheep, and goat.

Veronia amygdalina, also known as the bitter leaf or Ewuro in the Yoruba language, is a small shrub that grows to about 2-5 meters high. It is a native of tropical Africa and has numerous health benefits for both humans and animals.

About 120grams of the leaves of this shrub are collected and pounded with 100ml of water. The mixture is allowed to settle for about 12 hours; after which the liquid is then sieved and served orally to one cattle, sheep or goat and poultry bird. It is best served by drenching as the solution tastes very bitter.

Khaya senegalensis, also known as African mahogany, is a very tall tree that can grow to about 30 meters high. It is a deciduous evergreen tree and a native of Africa.

The bark of this tree is collected, air-dried and grounded to form powder; the powder is then mixed with 1% red potash. About 75grams of the powder should be mixed with water; it is then stirred to make it evenly diluted in the water because it forms suspension. It is served orally through the mouth by drenching the livestock to be served.

Pawpaw is a natural internal cleanser. It is very effective in controlling intestinal worms in livestock animals especially in rabbits. The leaves should be chopped and served fresh to any livestock animal; poultry birds, cattle, goat, sheep, and rabbit; in need.

You may find these helpful:

Join our Facebook community for instant updates from us.